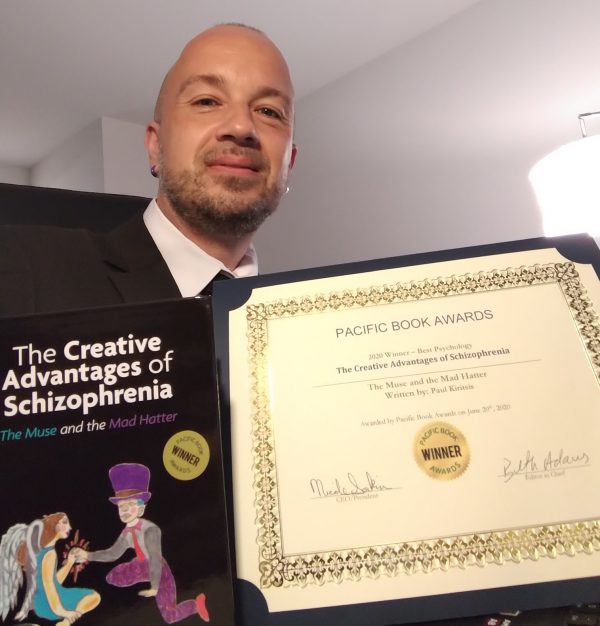 Paul Kiritsis has completed his PsyD in Clinical Psychology from Sofia University, formerly the Institute for Transpersonal Psychology in Palo Alto, CA. He is a certified hypnotherapist, an interdisciplinary researcher, artist, award-winning poet, and short story writer, and the author of the creative compendium Confessions of a Split Mind. He holds postgraduate degrees in three academic disciplines: history (Western esotericism), professional writing (English), and psychology (clinical psychology).

His clinical interests include schizophrenia and hallucinations, the temporal-lobe epilepsies and their neuropsychiatric comorbidities, and the neurocognitive disorders. He is profoundly interested in the connection between creativity and disorder, as reflected in his published dissertation.

Paul Kiritsis was awarded Best Psychology Book of 2020 by Pacific Book Awards for his work, “The Creative Advantages of Schizophrenia: The Muse and the Mad Hatter.”

Palo Alto, California, July 13, 2020 – Paul Kiritsis, an alumnus of Sofia’s Doctor of Psychology in Clinical Psychology program, was recently awarded Best Psychology book by Pacific Book Awards for his work, ‘The Creative Advantages of Schizophrenia: The Muse and the Mad Hatter’.

The book taps into the link between Schizophrenia and creative thinking and achievement utilizing empirical findings and further explaining how creative potential can be channeled following diagnosis.

Growing up alongside an uncle that had schizophrenia and witnessing firsthand the riddled relationship between his uncle’s innate talents and creativity, coupled with episodes of confusion, disorganization and hallucinations led Kiritsis to want to better understand his uncle and others that are diagnosed with schizophrenia. “I always wanted to make sense out of that paradox,” Kiritsis acknowledges.

Kiritsis attributes his success, along with the success of his book, to the faculty and education he received from Sofia. “Studying at Sofia University was instrumental in my success because it equipped me with the necessary research and scholarly skills for such an undertaking”, Kiritsis says.

Aneel Chima, a faculty member at Sofia, is someone Kiritsis was greatly inspired by while studying at Sofia. “I was in awe of his enthusiasm and fervor, and how he always managed to incorporate experiential activities into the subject syllabi which made the learning environment all the more rich and profound,” Kiritsis recalls.

While this accomplishment is gratifying, validating, and “bequeaths a degree of legitimacy to the project itself,” Kiritsis is already hard at work on three new books.

He has a few words of advice for Sofia students and anyone else seeking a successful career in the world of publishing; “The most decisive ingredient for success is perseverance and openness to constructive criticism and feedback.”