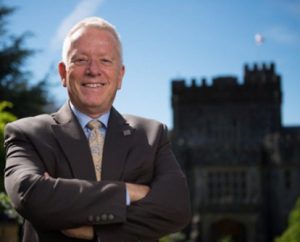 We are pleased to have someone with senior academic and operational experience in higher education to assume this role of leadership in this critical time for the University and higher education in general.

David FiguliChair of the Board of Trustees

He is currently Past President, the Inter-American Organization of Higher Education (IOHE a Canadian based organization of over 350 Universities in the Americas). He has established a series of strategic partnerships with leading Chinese state agencies (SAFEA, CYCIE, CEAIE), Maple Leaf Educational System (MLES), Concord College Sino Canadian and appointed an Adjunct faculty or Visiting Professor at a variety of internationally recognized universities. In 2020 he was appointed Honorary President, Shanghai Lida University.

At Royal Roads University, Cahoon has served on the Campaign Cabinet of the United Way Victoria, the Advisory Council of the Order of BC, as President of the University Public Sector Employers’ Association (UPSEA) and as a member of the judge’s panel for the Premier’s Innovation and Excellence Awards for BC Public Services – 2015. He is a former member of the Research Universities Council of BC (RUCBC) and of Universities Canada and served as a member of its international Relations Committee. He is a founder of the LGBTQ President’s in Higher Ed. He has been an advocate for establishing and supporting the Vancouver Island Presidents Post-Secondary Alliance and in establishing and supporting the South Island Prosperity Project (SIPP) and served on the District of Saanich’s Transportation and Environment Advisory Committee.

Cahoon has served on the editorial boards of four journals, authored or co-authored more than 40 articles and edited or contributed chapters to numerous books on organizational development. He has presented more than 85 adjudicated conference papers throughout his academic career. He was named an outstanding academic by the Inter-American Organization of Higher Education in and is a successful federal research grant recipient. In May 2015, Maple Leaf Educational Systems awarded him its highest recognition, the Medal of Excellence and Honour.

Message from the President:

“Sofia education recognizes that learning is multi-faceted and ranges from social, intellectual, emotional, spiritual, physical, and creative. We are grateful for your choice to learn with us at Sofia and tremendously appreciative for the time and effort that you have taken to arrive here. Good luck on your transformative journey.”

As Vice President Administration and CFO, Chris Nguyen is the senior administrative officer for Sofia University having authority over, all non-academic affairs including the financial, operational, business and investment interests of the University. He is also responsible for coordinating and managing the university’s operating and capital budgets and for safeguarding and optimizing return on the university’s assets.  Chris is a member of the Cabinet and works collaboratively with other senior leaders to support the President and the Board of Trustees in advancing the mission of the University.